Mandurah is Western Australia’s largest regional city and although regarded as one of WA’s favourite nature playgrounds, how much do you truly know about this coastal city? In this article we share with you 10 things you didn’t know about Mandurah… prepare yourself for some surprises! 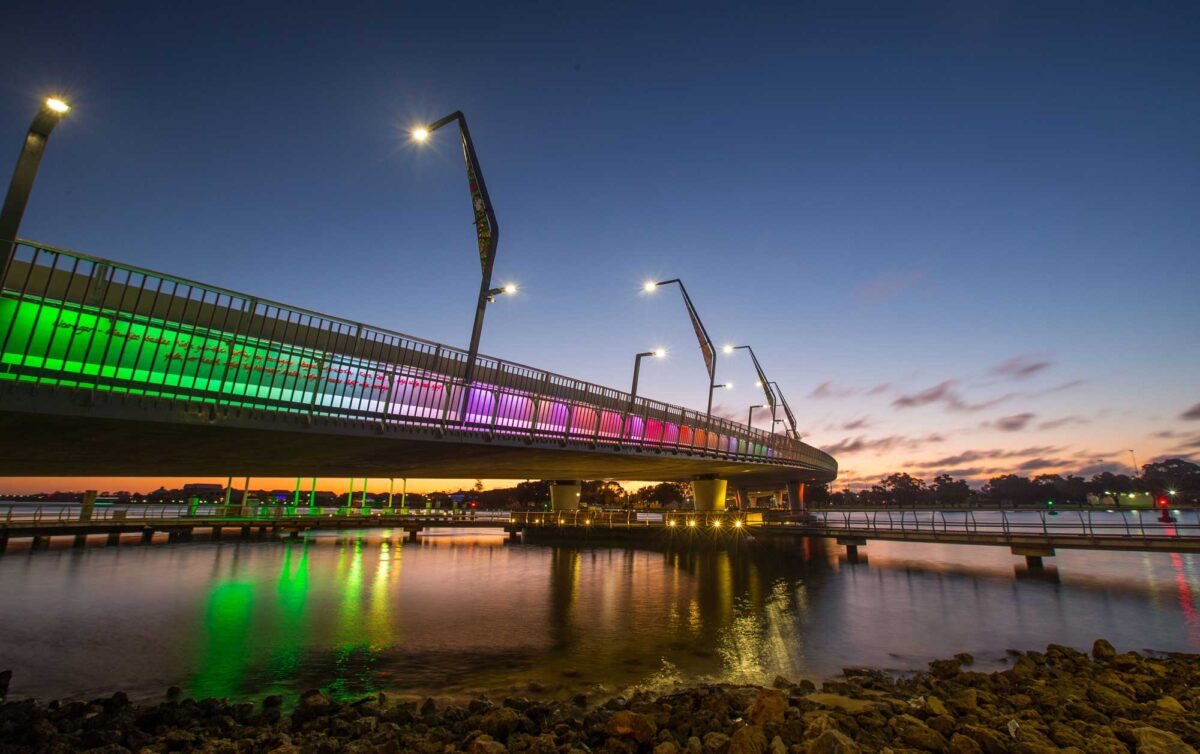 10 things you didn’t know about Mandurah

10 Things You Didn’t Know About Mandurah

Mandurah is Western Australia’s largest regional city and although regarded as one of WA’s favourite nature playgrounds, how much do you truly know about this coastal city? In this article we share with you 10 things you didn’t know about Mandurah… prepare yourself for some surprises!

Mandurah is full to the brim with wonderful and exciting surprises. From the city’s history as a popular fishing village, to the picturesque coastal views, to the rapid growth of community – the city of Mandurah has never failed to delight and excite both visitors and long-time residents.

Although we’ve become used to the name “Mandurah,” seeing it mentioned on websites, maps, signs and more – the name holds important historic meaning that still influences the city today.

As you explore Mandurah, you’ll discover references to this important Aboriginal history throughout architecture, artwork, nature and tours.

Although not big compared to other cities in Australia, Mandurah is the state’s second- largest  city in Western Australia, with a population of more than 90,000 spread across 173.5km2 area! Once you see the spacious nature parks and beautiful ocean views, it’s no wonder that Mandurah was crowned 2022 Top Tourism Town!

3. How deep is Mandurah Estuary?

The Mandurah Estuary is a large system of water that is a part of the Peel Inlet, connected to the Indian Ocean via the Dawesville Channel in Mandurah. Although covering an incredible area  (134 square kilometers), the average water depth is only approximately 1-2 metres, making it safe and friendly for all family members to enjoy.

For those who are looking for a swim, connected to the Estuary is Mandurah’s iconic Kwillena Gabi Pool. The pool was named by Bindjareb Boodja Traditional Owners, and fittingly translates to ‘dolphin waters’, as these playful mammals are a common sight in Mandurah’s waterways. Surrounded by floating pontoons, the Kwillena Gabi Estuary Pool starts shallow and becomes approximately 4.5 metres deep allowing kids to show off their bombies!

4. How high is the Mandurah bridge?

The Mandurah Bridge has been rebuilt not once… not twice… but three times!

Throughout history, the Mandurah Bridge has been a crucial part of transportation for the city. The first build in 1894 was led by Matthew Price who constructed the bridge from jarrah and karri at 12 feet wide by 600 feet long. This design was built to last, withstanding many storms and floods.

In 1952, at the end of WWII, the State government committed to improving transport infrastructure in Mandurah and they saw it was time the Mandurah Bridge was replaced. The piles were to be made completely from reinforced concrete to prevent teredo worm damage that Price’s design experienced.

With each rebuild, the Mandurah Bridge has become stronger, more durable and has grown to accommodate the growing population.

The most recent rebuild was in December 2017, which saw the Mandurah bridge grow to 4 lanes with a clearance height of 4.4 metres. Since its construction, the Mandurah bridge has greatly improved vehicle and pedestrian movement with two traffic lanes for each direction as well as providing a separate and wider lane for pedestrians and cyclists.

Today, the Mandurah bridge is an important part of everyday life in the city improving road safety, reducing traffic congestion and offering a scenic drive over the Estuary.

5. What is Mandurah known for?

When someone mentions “Mandurah” it instantly brings to mind imagery of wide open water, wetlands and glorious beaches. This is for good reason. Waterways and naturescapes make up the majority of the city! From the incredible estuary (that’s twice the size of the Sydney Harbour), the internationally recognised wetlands, the many heavenly beaches, one of Australia’s healthiest dolphin populations and blue swimmer crabs – Mandurah is a unique place to be truly relaxed by nature.

6. Who were Mandurah’s first people?

The first people of the region were the Bindjareb people of the Noongar Nation who gathered, fished and lived in the area. As Mandjoogoordap is home to abundant natural resources, the people lived comfortably enjoying the wonderful wildlife home to the area.

7. Who is the Peel region named after?


Mandurah is part of the Peel region, one of the nine regions of Western Australia. In 1829, British settlers arrived on the shore, which saw Thomas Peel granted 250,000 acres of land between what is now Cockburn and the Peel inlet. Thomas Peel transformed the land, and not for the better, destroying Bindjareb homes, people and culture. In 2017, there was a campaign seeking to rename the Peel region due to these  devastating ties to history.

8. Is there UK royalty living in Mandurah?


Not quite, but pretty close!

If you don’t know Fiona Burton, allow us to introduce you. Fiona Burton holds an impressive resume, having made scones for the Queen herself in England’s very own Buckingham Palace! Although the pastry chef had a delightful time baking fresh scones and cakes for the Queen and her guests. Now, Burton shares her passion for pastries with Mandurah with her business Fiona’s Fancies.

What brought Fiona to Mandurah was her love for Australia. She knew she wanted to move to the country with her husband and when she discovered the seaside city Mandurah she knew she found home. Fiona describes Mandurah as her “little piece of paradise.”

9. What is the story of the Creery Wetlands?


Many people might not know that the Creery Wetlands might not be what it is today if it wasn’t for the immense support and protection of the Wetlands from the community. It was back in 1985, Len Howard led a campaign with the Peel Preservation Group against the canal development of the Creery Wetlands. The result was transformative, changing the direction of the city council and becoming the biggest conservation win in history for the Peel region. Howard became an environmentalist superstar, with his legacy and advocacy influencing policies today.

10. Meaning behind the Meeting Place artwork

Designed by Ned Beckley (sound design), Sam Price (motion design) and Steve Berrick (design and programming) and installed in May 2021, the Meeting Place is an 8-metre tall piece of artwork that stands at Mandurah’s Western Foreshore. The artwork reflects Mandurah’s identity and celebrates the connection people have to the Old Bridge, the estuary & the waterways. The artwork was inspired by a water droplet, aiming to bring water onto land. It’s more than a physical piece of beauty too, it offers a completely immersive experience with LED lighting, sound design as well as seating with reclaimed jarrah timber from the Old Mandurah Bridge.

If you’re visiting Mandurah, this is simply a must-see both during the day and at night (when it lights up).

Many people, places and stories flow through Mandurah, making it a wonderful place to visit and explore. We hope these 10 insights have given you a new perspective on the city and if you think you might know something about Mandurah that we don’t… let us know! We always love hearing the weird and wonderful tales hidden just on your doorstep. Find out more about Mandurah. 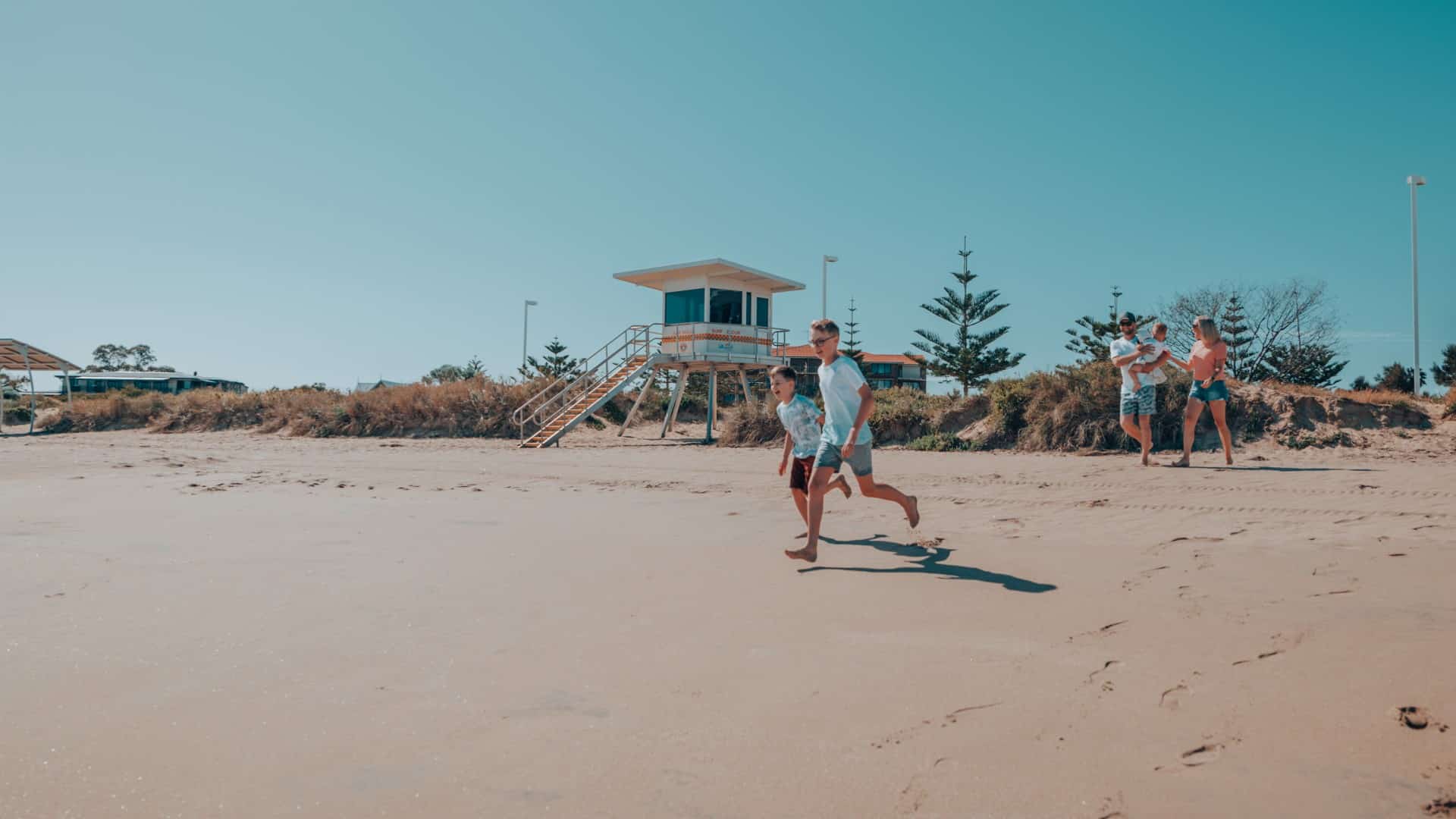 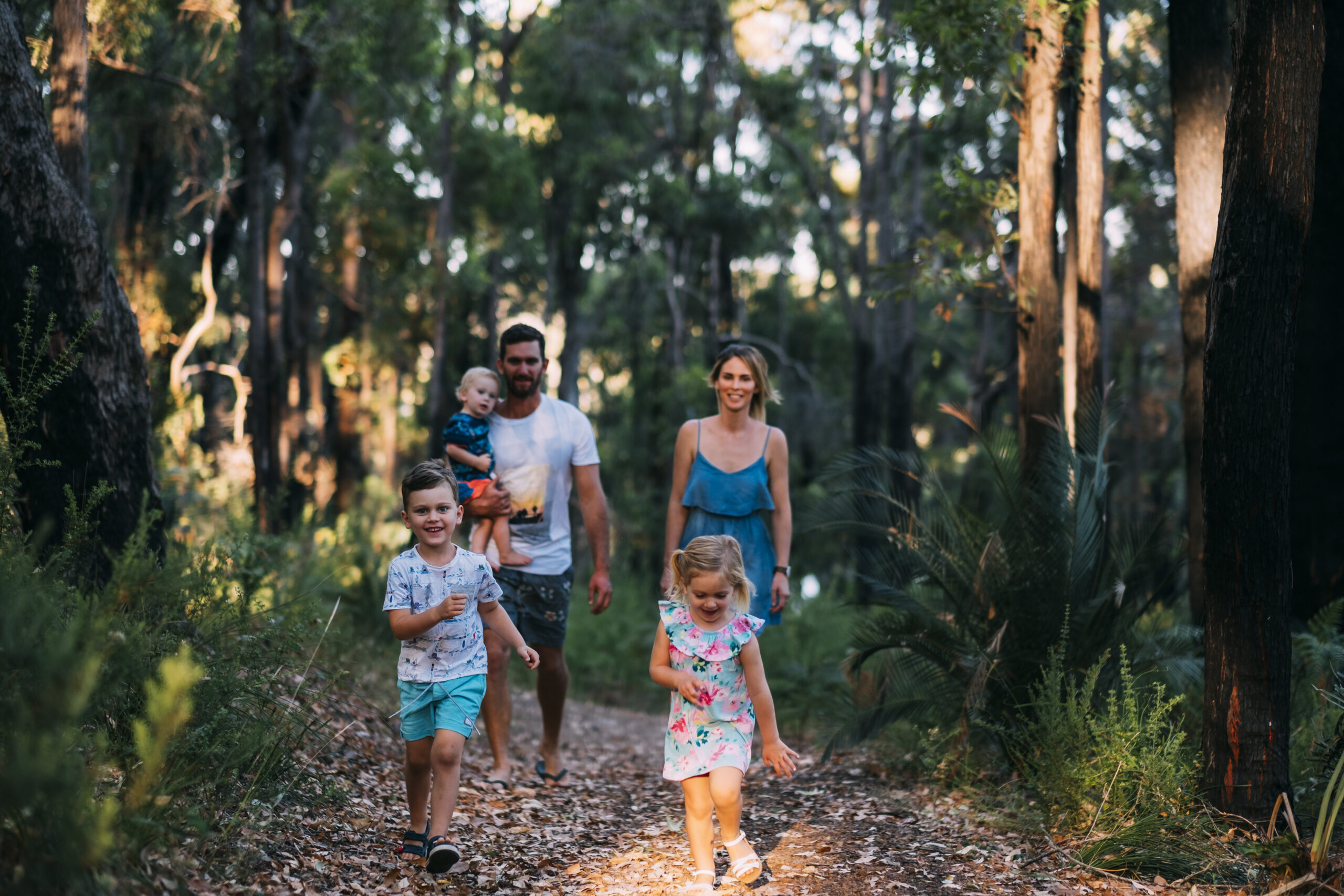 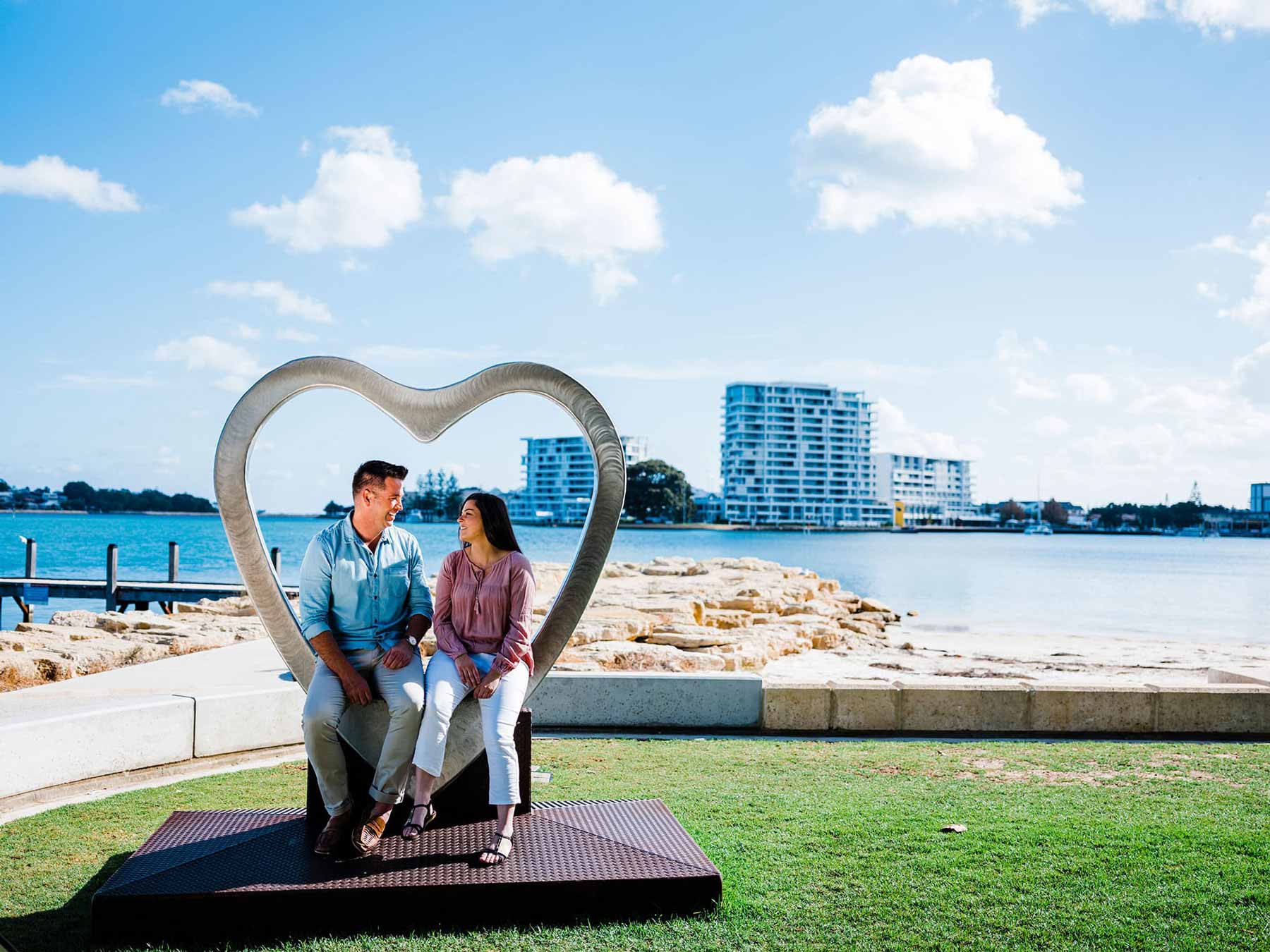 Romantic 2 Night Getaway Near Perth
News
Looking to rekindle the romance in your relationship or need to score some serious...
read more
Eat & Drink 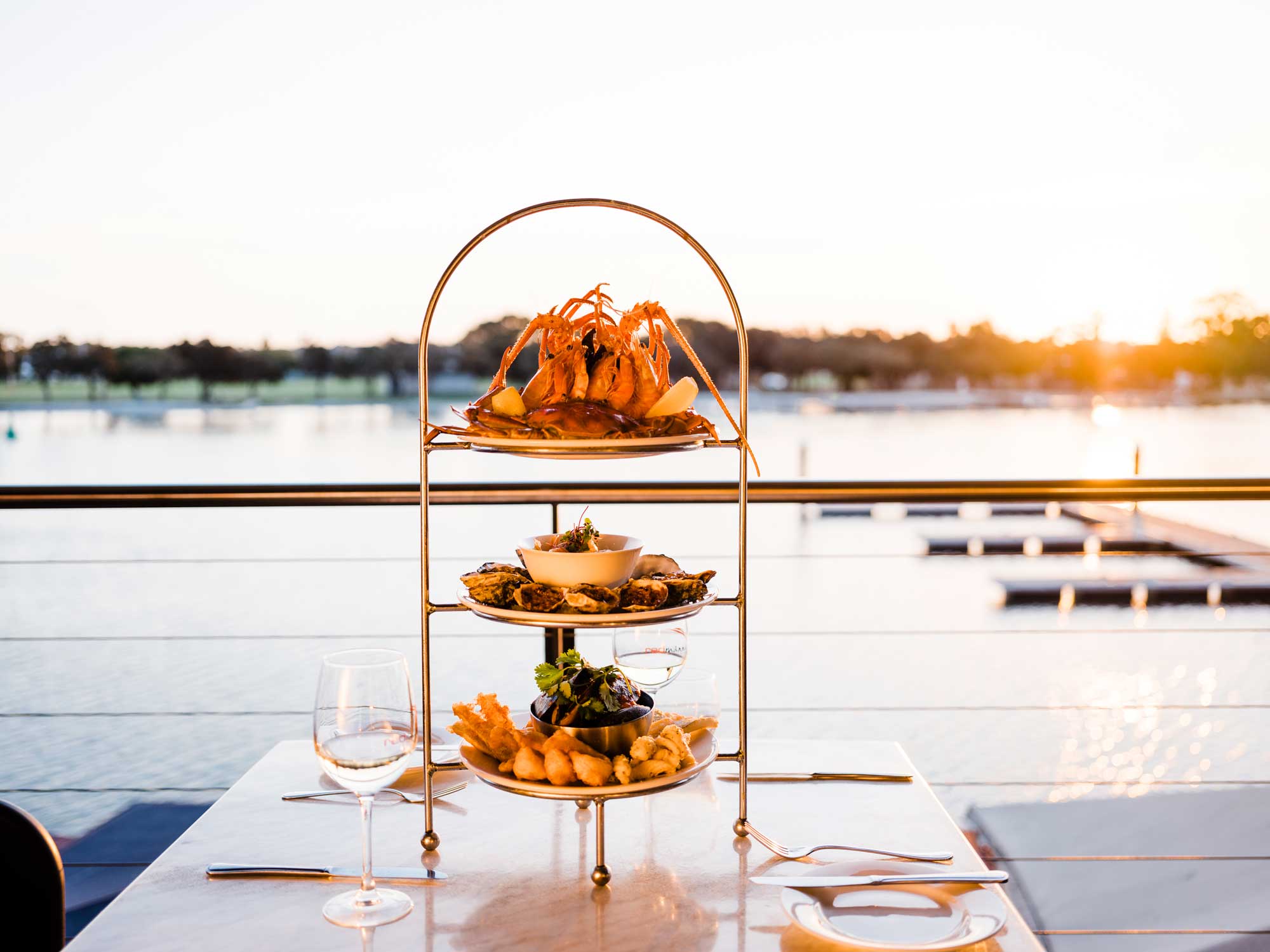 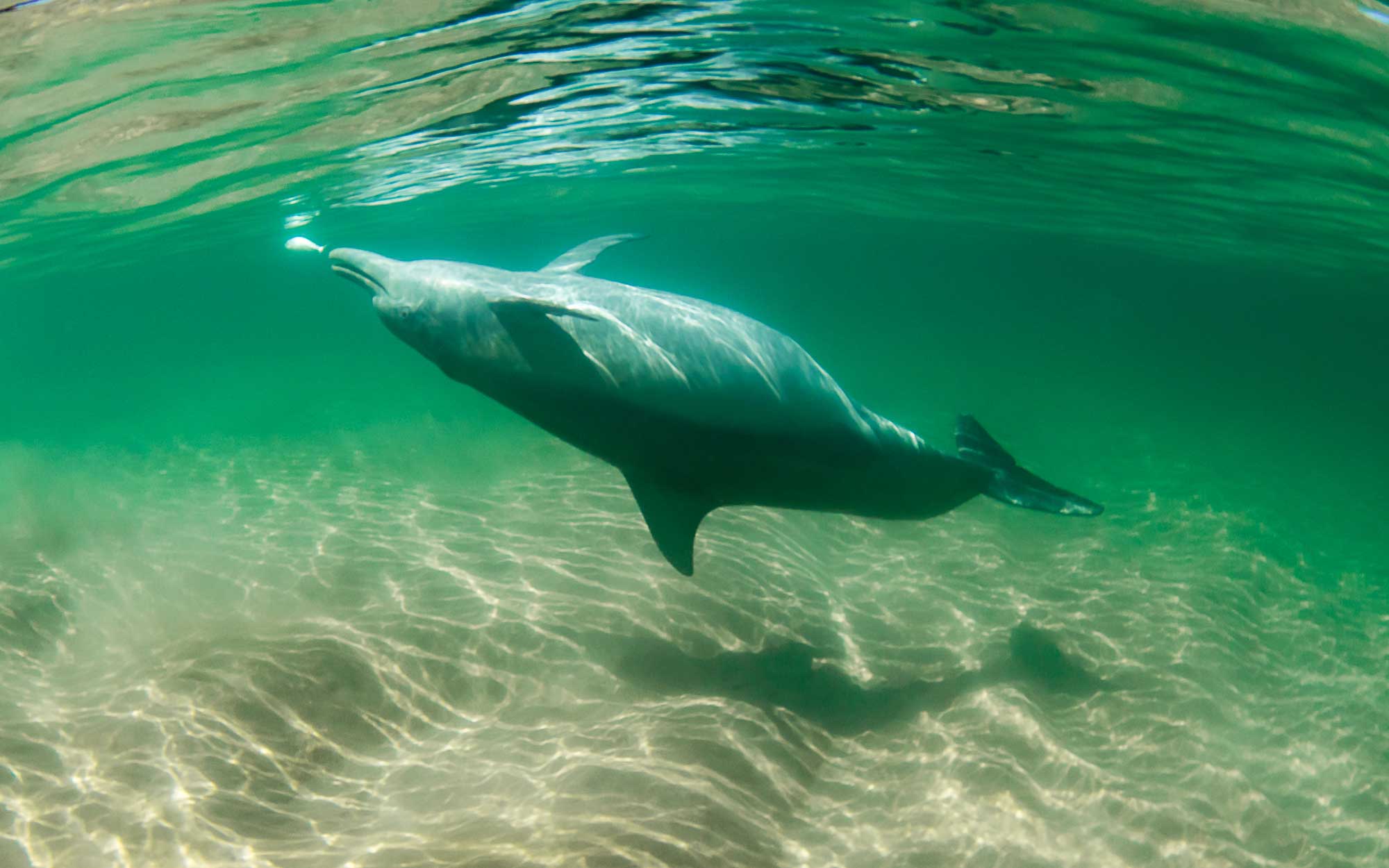 Dolphin Watching
Nature & Wildlife
A visit to Mandurah wouldn’t be complete without the sighting of at least 1...
read more
Aquatic & Coastal 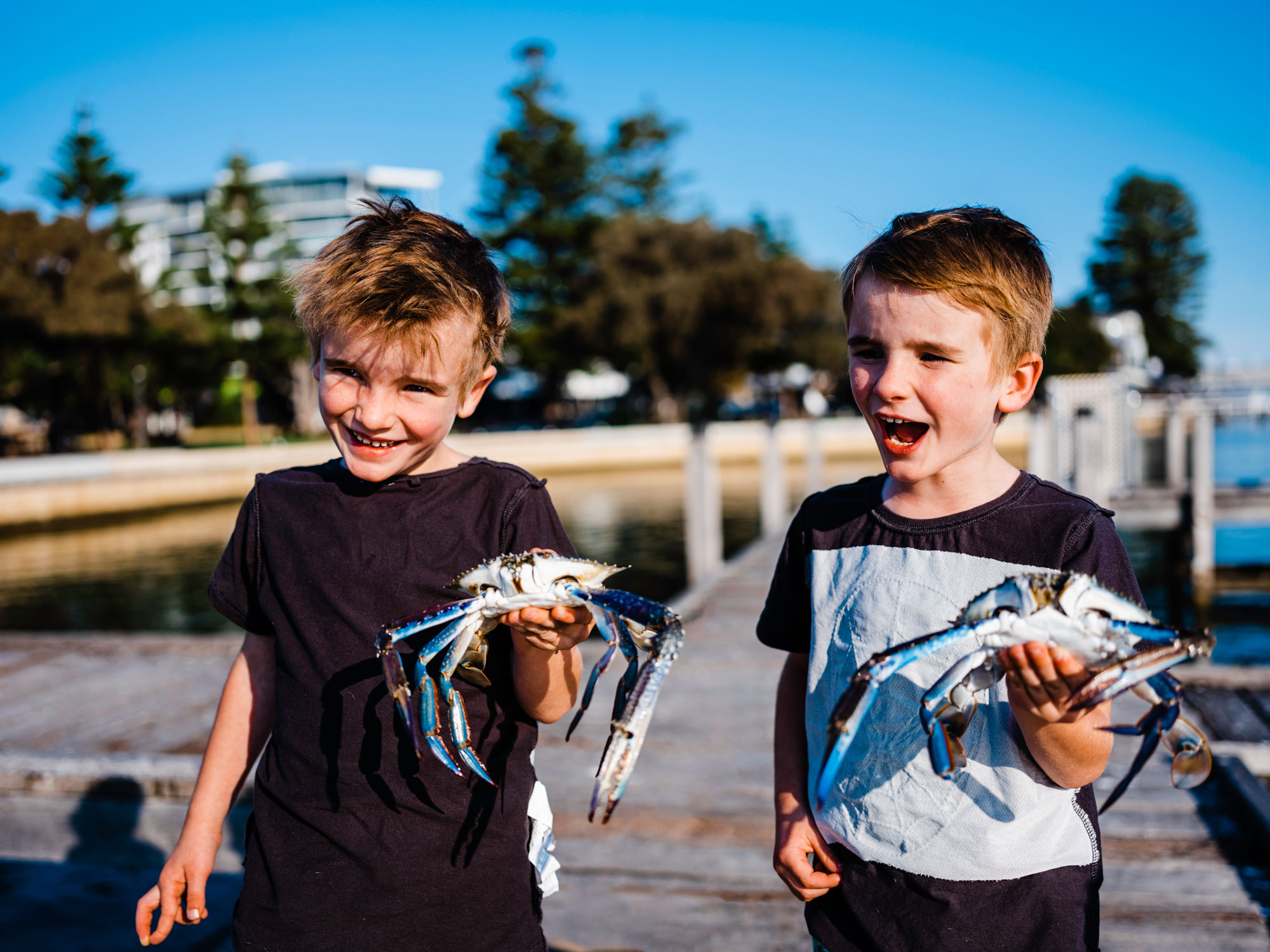